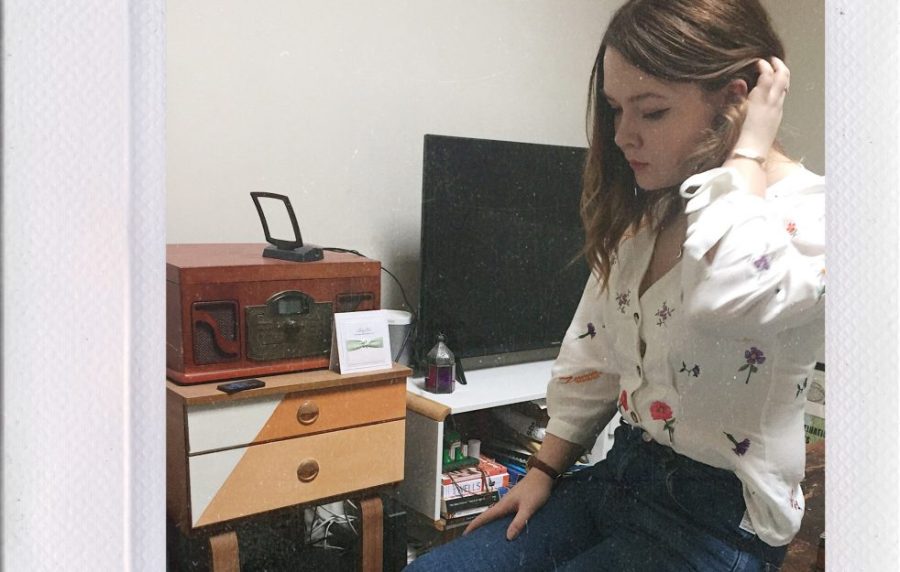 A few weeks ago I was heading for an evening out with with some friends. I hadn’t been out in an absolute age (seriously, picture a barren desert with no water but swap the water out for alcohol… You get the picture…) so I was, as you can imagine, chomping at the bit for a tipple or two. Like any of you out there I love to have an excuse to get my glad-rags on and put on that deep red lip and don that extra long eye-liner flick. 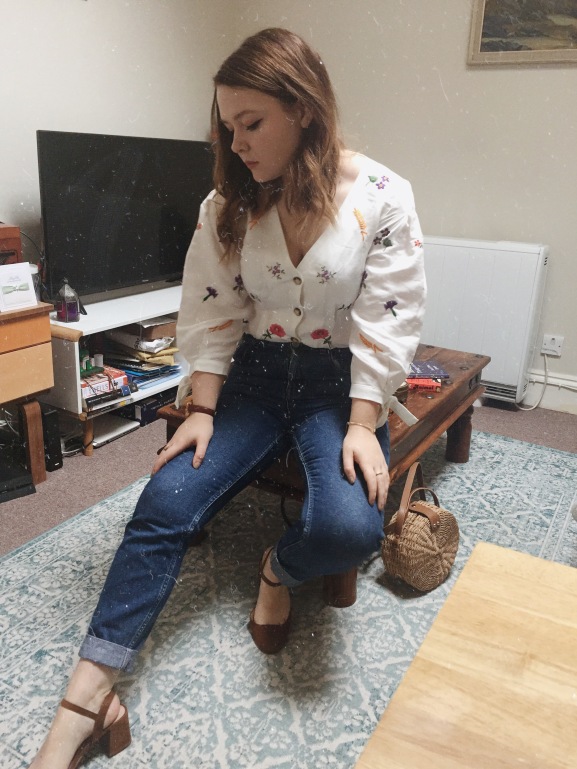 I had a pretty snazzy outfit mentally planned (I lead quite a sheltered life, you will discover this whilst reading my blogs…) and I was keen. As we were about to leave to inhale a massive dinner and as much wine as physically possible I went to grab a blazer I hadn’t worn before but I found myself hesitating. I ended up grabbing the same coat I have worn all winter (I love you really pea-coat) and went out into the night.

Now admittedly I was kind of happy that I chose the coat in the end as it was bleddy Baltic that evening and the late night (early hours of the morning…) walk home did warrant for some proper layers, but I kind of regret not taking the opportunity to wear that snazzy blazer which I knew would’ve made that outfit just that little bit more awesome. I love this blazer but every time I went to wear it I just chickened out, this bloody brilliant blazer was just sitting there unloved and unworn. 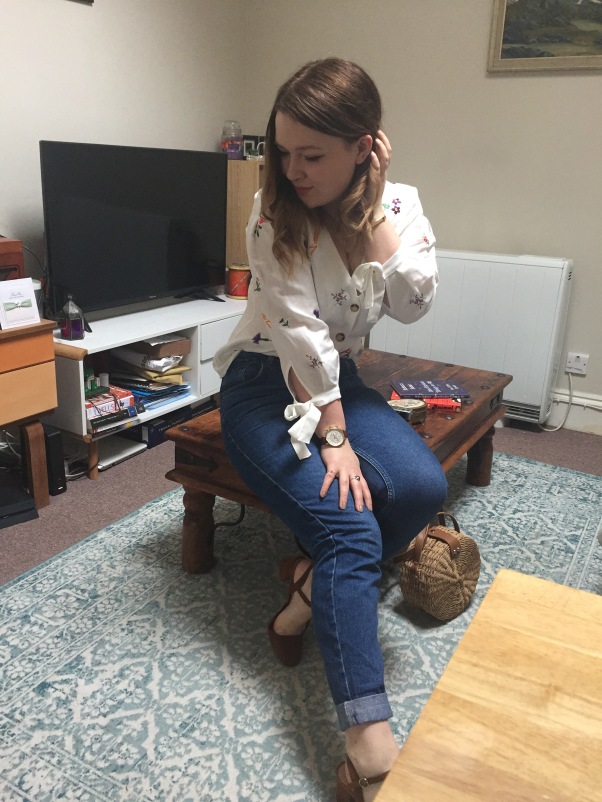 I hate myself for it but I chicken out of wearing certain outfits/items of clothing all the time and it needs to stop.

I’m not sure if it’s self-confidence issue, if it’s a self awareness issue or something else, I’ve never pin-pointed it to something specifically, but whatever it is I think it boils down to the fact that I worry about what people think too much. I’ve always had those nagging feelings, normally seconds before I’m leaving the house, that’s when my lack of self-confidence kicks in and my stupid mind takes over and decides that those boots will be inappropriate or that colour combo is too much.

I think this isn’t something only I feel, I know a lot of people would say that they had felt exactly the same at some point in their lives, if not felt it on a regular basis. But why do we care so much about what other people think? It’s not something that I’m even vaguely qualified to try and unpack but it does intrigue me and annoy me in equal parts.

I always like to try and feel comfortable in what I’m wearing, as we all do, whether thats the trusted classic combo of Breton stripes and high waisted jeans (what would I do without you?!) or that planned outfit I’d had mentally envisaged for that night out, but sometimes it can be so easy to slip into that nagging doubt that you’ll get those dreaded looks when you leave the front door. As I’m getting older I’m starting to care less but it is still tough and the outfit anxiety still hits me nearly everyday.

Whilst writing this I’m aware of the fact that it sounds a little bit narcissistic, that I think everyone in the world is looking at me and actually cares what I’m wearing on my night out. I know they don’t, I know most people have far more to worry about than the colour of my shirt or the style of my blazer but mentally there is still a small part of my stupid mind that thinks people do care and are judging and I flake on rocking an outfit on a regular basis. 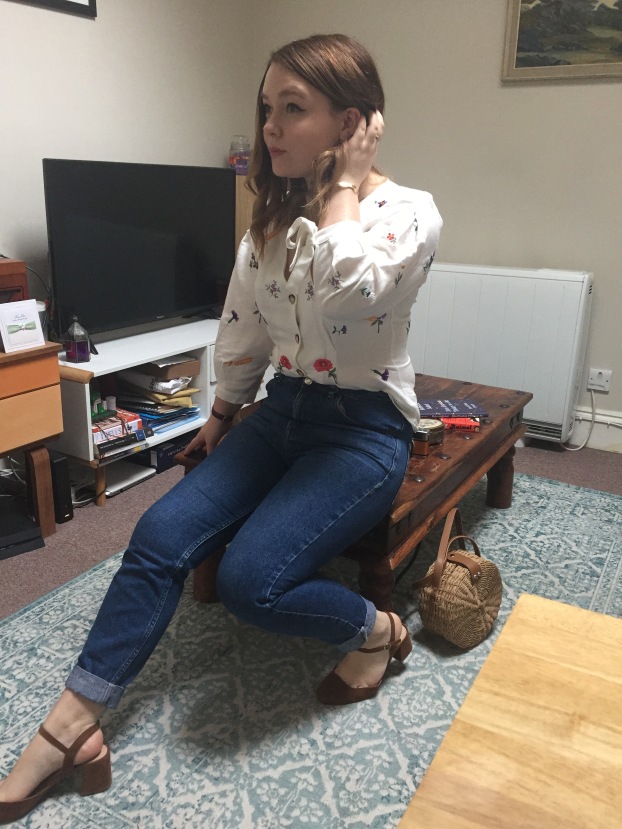 I always dress for myself and I’m never looking for that seal of approval from random members of the public and I definitely never dress for men as a lot of people (men in particular…) seem to think but it’s my own personal nagging doubts that tend to get in the way of me pushing the styling boundaries and in hindsight I get incredibly frustrated with myself for it.

Me and my sister always used to talk about the people we thought were cool and how they would wear whatever the hell they wanted and look bloody amazing with it. Essentially they had the confidence and had gotten to the point in life where they just didn’t care what other people thought. I admire people like that so much, my sister was one of them (although she sometimes didn’t think it) and that was something I admired in her. I need to get to this point in life, I’m still not quite there, but I’m working on it (mentally grabs self and shakes self and yells *PULL YOURSELF TOGETHER WOMAN!*)

I’ll keep you posted and I promise I won’t chicken out on that blazer on my next night out shenanigans.

4 thoughts on “The ones that got away…”

Why hello there, I’m Molly, a twenty something part-time blogger and Cornish lass currently living in Oxford. Vintage lover and fringe enthusiast, this is my little chunk of the interwebs featuring my passionate rambles on all things fashion, life and style. I hope you enjoy it…

It’s definitely big coat weather out there…❄️🍂
Not the best weather for a day pottering around London but a grand day none the less! 🌧🍂 (With some fab company too in the shape of my little bro @lotwstudios)
Forever wearing outfits I’m not 100% sure I’m cool enough to pull off…. BUT can we just take a moment for this mustard yellow/orange corduroy suit please?! 🍂🧡
A vintage brown suede pinafore dress of dreams… 🍂🤎
Probably about 5c too cold for bare legs but anything for the look right?! 👀❄️
Breezy, chilly days call for the best cosy scarves… 🍂🌬